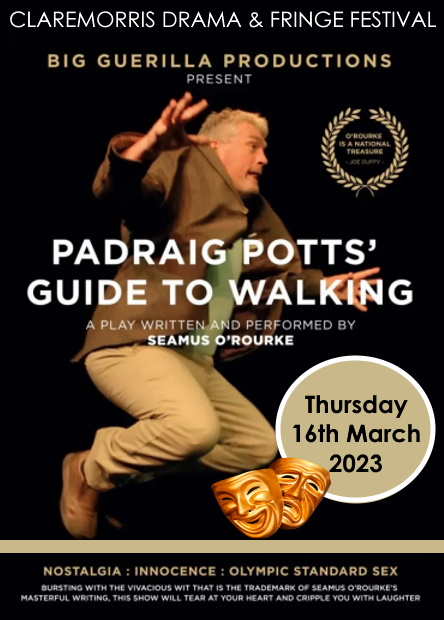 The 51st Festival opens with the Wonderful Seamus O’Rourke performing his own composition ‘Padraig Potts Guide to Walking’.

The play follows the life of Padraig Potts McKeirnan, who has a habit of just eating whatever is on his plate… metaphorically that is… from growing up near the tiny rural village of Drumnamee, County Leitrim in the ’70s and ’80s to falling in love with Silvia Lang, a perfect protestant girl… to marrying Mary Tague, the priests’ housekeeper, who he never really liked… to getting rid of Mary Tague and her mother, who he claims invented vinegar… and eventually to the realization that the world isn’t as big as he first thought. This is a story full of nostalgia, innocence, Olympic standard sex and Holy Water salad dressing… funny and tender.

As with all Seamus O’Rourke’s plays we expect to be highly entertained.